What is Bologna Italy known for?

If you are planning a trip to Bologna, read this post with nearly 30 top things to do in Bologna Italy. It’s one of my favorite cities, and while Bologna has tourists, it’s not overrun like some of the other popular cities in Italy.

Below are just some snippets of info and what Bologna Italy is known for.

Bologna’s name was originally Velzna or Felsina, and her origins date back to the 9th century BC.

The name Felsina stuck for a few centuries until the Romans conquered Bologna in 159 AC. The name changed to Bononia and then eventually, Bologna.

Bona, in Celtic, means, ‘fortified place.’  We know that Bologna had thick, fortification walls surrounding her for centuries, so perhaps that’s where the name came from.

What is Bologna Italy known for?

Bologna is known for the Oldest University in the western world

The University of Bologna began in 1088, and there are around 80,000 students studying there annually.

In the beginning, the University started teaching sciences and literature. It was a very forward-thinking university where female teachers taught as early as the 1100-1200s, which was quite avant guard for the time.

They introduced experimental sciences, called Natural Magic, in the 1500s and the study of Medicine started in the 1600s. Medicine is still a very popular discipline today.

Piazza Verdi in the heart of the Univerity of Bologna

This reminds me of a guy I met at university in Bologna. I was trying to communicate in my broken Italian, when I asked what he was studying, as you do.

He said, ‘Indovina?‘ Not knowing what indovina was, or whether it was a verb or a noun, I went to my trusty dictionary. An indovina is a soothsayer, tarot reader or fortune teller. I thought, how frickin’ cool IS this university that teaches students how to read Tarot.

Needless to say, I discovered indovina meant, guess. Verb, not noun… He wanted me to guess what he was studying. He wasn’t studying to be a Tarot reader, but a doctor.

Portico near University of Bologna

In 1999, Bologna pioneered the Bologna Process, which reformed Italy’s degree system to match internationally-recognized degrees of Bachelors, Masters and PhDs. Much of Europe now follows the same standard. In 2019, The University won the award for the Best University in Italy.

Today, Bologna has 4 satellite campuses: Forlì, Cesena, Ravenna and Rimini, along with international presence in Brussels.

Bologna is known for the Food – The Belly of Italy

They call Bologna, La Grassa, or the Fat, for a good reason.

Emilia Romagna is the region where Bologna is located, and it is thee gastronomic capital of Italy. Its food history is as old as the university itself!

You find fresh egg-based pastas like Tagliatelle, Tortellini, Tortelloni, Pappardelle, Cappelletti, Green Lasagna, and other varieties of fresh pasta. They prepare and eat lots of olives, meats, and fish, too.

The region produces cured Prosciutto ham and Parmigiano Reggiano cheese, the original Parmesan cheese. And both come from the nearby city of Parma. Our Parmesan cheese doesn’t come from a green can, but it’s a hunk directly chopped off the cheese wheel. 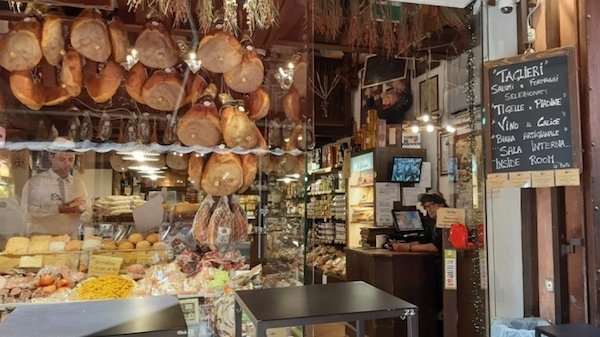 The meats and cheese in Bologna is characteristic of this gastronomic city.

The dark, thick, slightly caramelized Balsamic Vinegar comes from the city of Modena, near Bologna. Then you have salamis and meats, like Mortadella, which is where our Bologna (Baloney) comes from. Mortadella is a much tastier salami of heat-cured pork, bits of pork fat and pistachios. It’s nothing like what Oscar Mayer produces. And Bologna doesn’t have a Wienermobile. 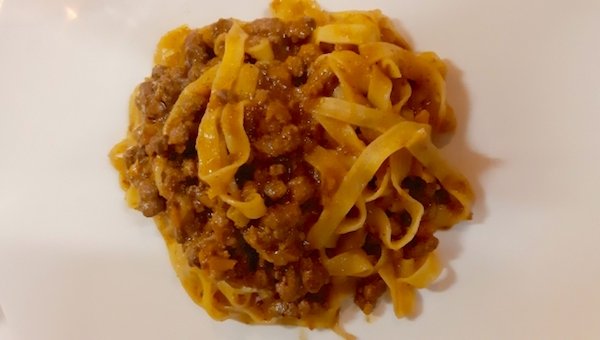 Bologna is also known for their meat sauce, called Ragu. Americans refer to it as Bolognese sauce, but for the Bolognesi, they call it Ragu. And they don’t typically serve it over spaghetti, but tagliatelle. The Bolognesi like their food and you often find specific sauces for different types of pastas. One way to piss an Italian off is to serve the wrong sauce on pasta.

The food was actually the tipping point in my decision to study in Bologna for a year.  My dad used to make Spaghetti Bolognese (al Ragu) every year for my birthday, and it’s still my favorite, but I get it with tagliatelle.

When you visit Bologna, consider taking a cooking class to learn about these age-old culinary traditions. It’s well worth your time.

Bologna Italy is known for its Communist and left-leaning Governments

They call Bologna, Il Rosso, partly because of the red terra-cotta roofs, but more recently, because of its communist past, which started after WWII.

The 1970s were a prominent time of conflict between political parties, and the students at the University of Bologna were some of the most vocal. It was a time of great political and economical differences between citizens and parties.

The students had the right to protest and were quite vocal in their convictions. But in March 1977, the students protested against a meeting of the Communion and Liberation group (right wing) that was happening on campus.

Students protesting in Bologna in 1977 ©infoaut-org

A riot broke out between left-wing and right-wing groups, and they called in the police to stop the protest. Unfortunately, the Italian Carabinieri killed one student, Francesco Larusso. Other cities in Italy also had riots later that year.  The 70s were a turbulent time all around in Italy.

In August 1980, a bomb exploded in Bologna’s train station killing around 80 people and wounding 200 others. Four right wing militants eventually received life sentences in jail for the bombings. Two others got brief sentences.

They rebuilt the station and now there is a clock on the side with the time of the bombing at 10:25. The clock stays at the same time as a reminder of the event.

10:25 when the clock stopped at the Bologna Train Station.

Bombing of Bologna’s Train Station – A plaque explaining so we do not forget.

The Due Torri and the Towers of Bologna

Back in the day, Bologna had nearly 180 towers. It was like an original version of today’s Manhattan. 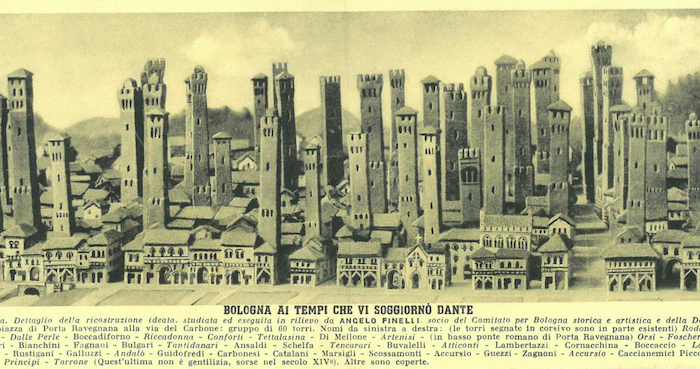 Bologna’s Towers during the time of Dante. I actually have this as a double fold post card.

Bologna, and the Bolognesi, were quite wealthy, and still are. You had to have money to build these towers, but you also needed a tower to keep you and your family safe. It’s like an early version of, ‘Keeping up with the Jones,’ but vertical.

Only 22 towers remain in Bologna, and the two most popular are smack dab downtown.

The tall tower is Torre degli Asinelli, and the leaning, squat tower is Torre Garisenda. Walk up the 500 steps of the Asinelli Tower and enjoy the views over Bologna’s rooftops. You can’t enter the Garisenda Tower, but a cool fact is that it leans 1.2 degrees more than the Leaning Tower of Pisa.

The leaning Torre Garisenda in Bologna

Bologna has 25 miles of Porticos

25 miles….!!! There are 40 kilometers of porticos in Bologna. The porticos are the covered walkways that make moving through town easier. You can walk in rain or snow under the porticos and not be bother by the weather.

The portico on Via Rizzoli

Some porticos are more ornate than others, but they have been around for a long time. Even in Nice, where I live now, there are remnants of our Italian past with a variety of these porticos to walk under.

The longest portico in Bologna goes from Porta Saragozza up to the Sanctuary of San Luca. It’s a beautiful walk of nearly 2 miles under the porticos. You’ll pass 666 archways on the way. Yes, that’s a nasty, ominous number, but that’s what it is. 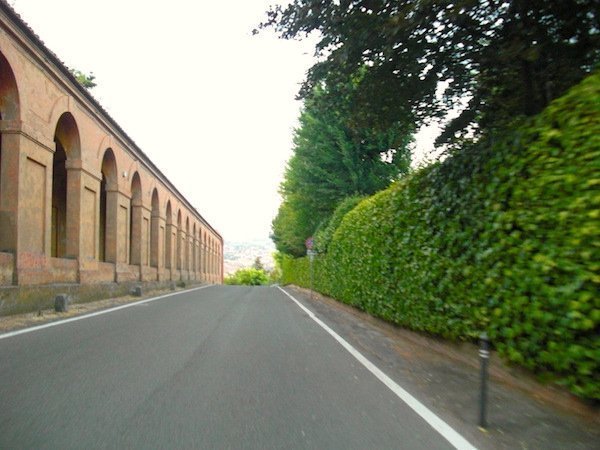 The portico up to San Luca

The Cupola, or crown, of the Sanctuary of the Madonna di San Luca is the highest in Europe. It’s nearly 1000 feet above the city, and since 2017, there is a panoramic terrace to walk around to see the magnificent views over Bologna.

It’s not the terrace that San Luca is known for, it’s the image of the Madonna and child that are inside.

Bologna had months of rain in 1433. Crops were severely damaged and famine was setting in.

In the Sanctuary, there is a painting of the Madonna and child. The townsfolk asked the Blessed Virgin for a break in the rain, and they held a procession from San Luca down to Bologna with this painting. By the time they reached Porta Saragozza, the rain stopped. 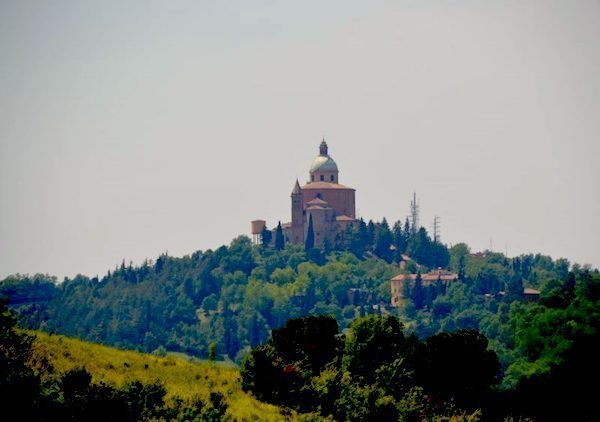 Sanctuary of San Luca in Bologna on the hill

Even if you are not a museum buff, Bologna has some of the most impressive museums in all of Italy, if not Europe.

Fico Eataly is the world’s largest food park. It opened in 2017 and hopes to attract 6 million visitors a year. Some call it Wholefoods on steroids since the place is massive. So massive, they provide bikes for you to ride around on.

But Fico is an interesting interactive learning location as well. They have farm animals, and the restaurant kitchens are behind glass panels so you can see what’s going on. They also provide cooking classes and other experiences to keep you and your kids entertained for the day. It’s not cheap, but you can get a free bus from the center of Bologna out to Fico, which takes 20 minutes. Give it a taste!

Hopefully you have a bit more information on what Bologna Italy is known for. It’s a fantastic city and there’s plenty to do for a weekend, week or a lifetime. Enjoy! And check here for other activities in Emilia Romagna. 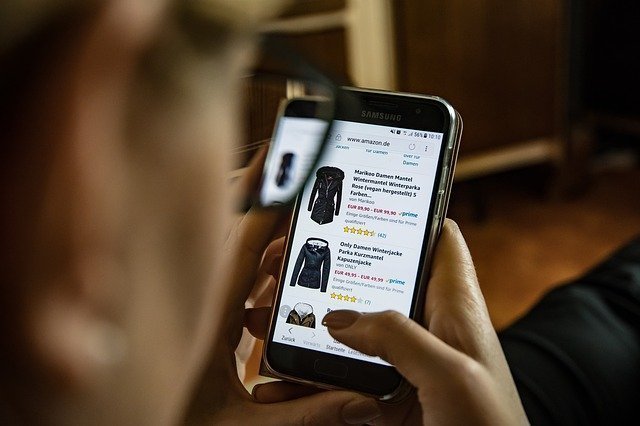 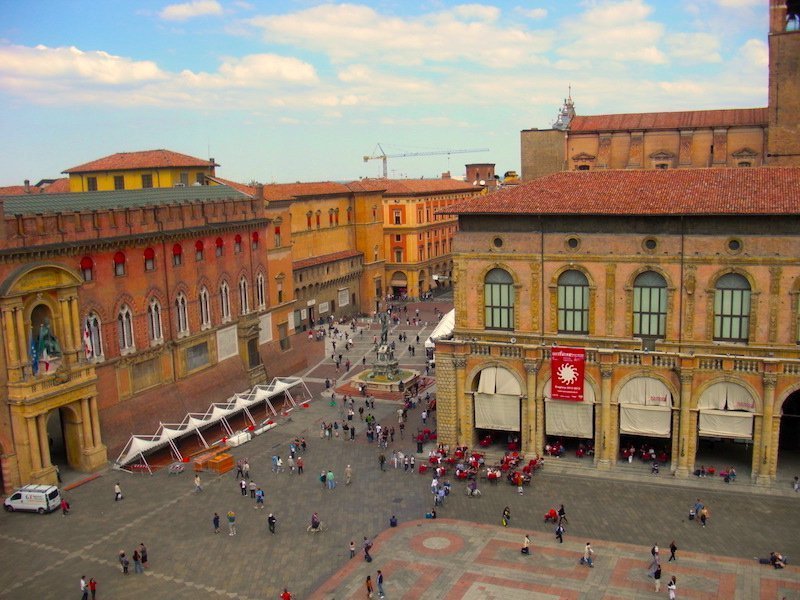 Bologna, Italy will always hold a special place in my heart. It’s the first place I landed on my first-ever European trip. It wasn’t really a trip. I moved to