I know this might sound crazy. Why would anyone look for the best place to stay in Mykonos if they weren’t planning on staying? Well, because many people actually use Mykonos as an arrival or departure point, and at times you have to book a night or two to coincide with ongoing ferry or air travel.

I love the Greek islands, and I’ve heard Mykonos’ beaches are some some of the best, but I really appreciate the more authentic feel of the less popular islands. Mykonos’ reputation is known the world over, and to be honest, it is not my cup of tea for more than a day or two.

Between the masses of people coming from mainland Europe on cheap flights, to day-trippers from other islands, historians sailing to Delos, and literally boat loads of cruise ship passengers, Mykonos is a swollen land mass that many already say is on the brink of over tourism.

At first glance, you could be anywhere. They have traffic jams, a party atmosphere, high price tags, and there’s little that is authentically Greek to me. 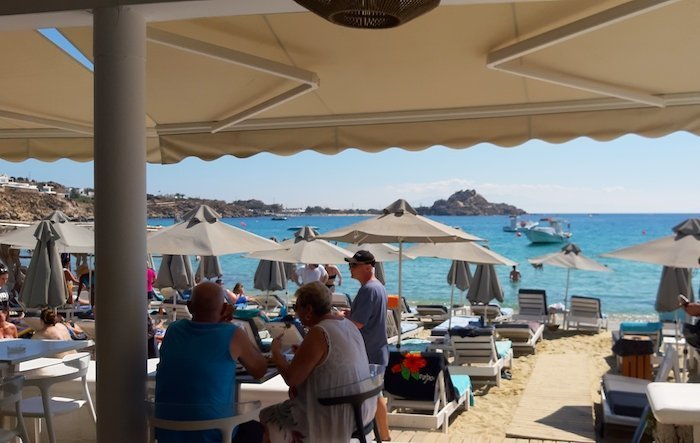 On the other hand, because Mykonos is serviced by numerous low cost airlines like Volotea, Neos, Vueling, Easyjet, Transavia, along with Greece’s own Aegean Airlines, it’s a great, cheap Greek destination to fly into. You can often find super bargains to fly in and out of Mykonos Greece. 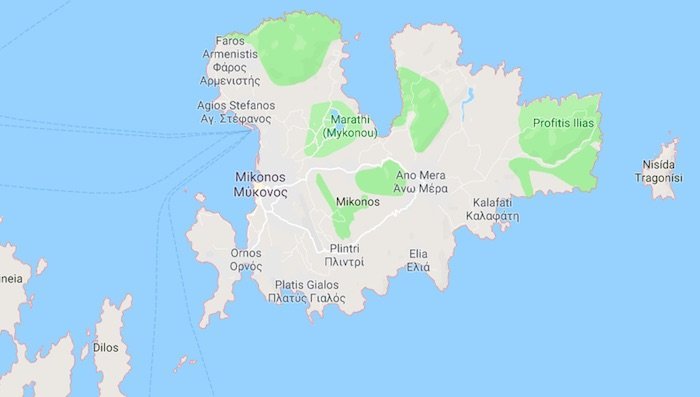 For instance, I recently booked a 1-way flight from Nice to Mykonos, via Athens for $120, and I booked only a week in advance.

The caveat was that I was arriving at 8:30pm, so it was too late to get off the island. I needed to book a night at a hotel and then continue my ferry travel in the morning. But where is the best place to stay on Mykonos if I’m taking a ferry out? The Port area! Continue reading!

Let me give you some perspective. Mykonos Airport to the Tourlos Ferry terminal is only 3.29 miles, but when my driver picked me up, it took 25 minutes to get to my hotel in Tourlos. Mykonos is hilly and the roads are not wide. And this was at night. 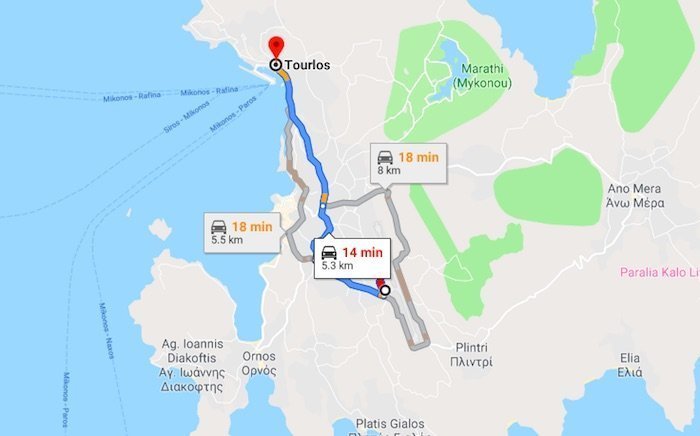 Doing this in reverse, upon my return, I wanted to chill at a beach for a few days before flying out. I arrived at Mykonos’ ferry terminal in Tourlos and decided to stay in the Platis Gialos area since it was too far away and was just on the other side of the airport. 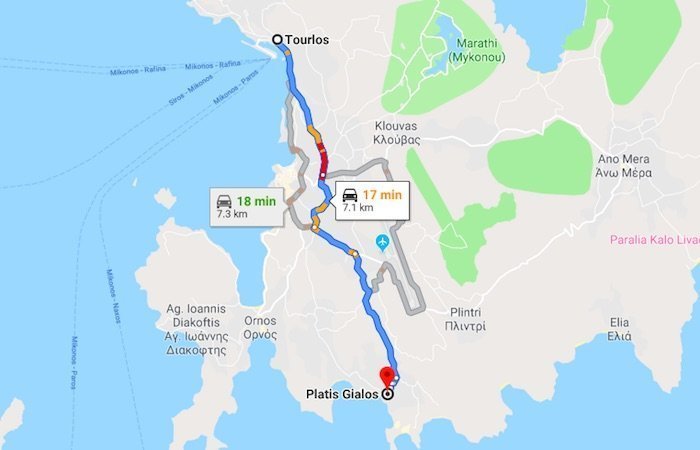 I had to take a local bus from the Mykonos Ferry Terminal to Mykonos town, and then swap to another bus to Platis Gialos Beach.

The distance is 4.4 miles, but in all, it took me 2 hours! Two hours for less than 4 ½ miles. This was at high noon on a day in late September. We are not even in high season.

Sure, I could have arranged a private transfer, but not everyone wants to do this, or thinks to do this. You expect to rock up and hail a taxi… not here. And it wouldn’t really matter. There was traffic everywhere, so if the bus was not moving, your taxi wouldn’t be either. Sure, a taxi may have taken different roads, but again, there were NO taxis at the ferry port. I was stuck with the city bus.

To note: Buses are more expensive on Mykonos than the other islands. On Paros and Naxos, I paid $1.95 for a one-way bus ticket. On Mykonos, the fare from the ferry terminal to town was $2.75, and another $2.00 to get me to the beach location. 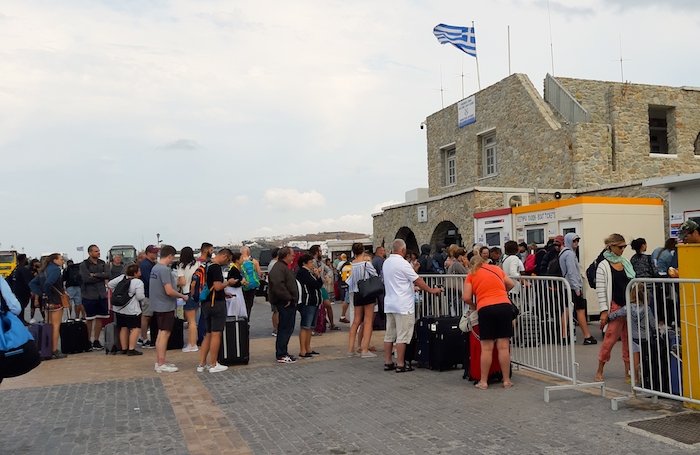 People in line to get a ferry ticket in Mykonos

When I arrived at the ferry terminal in Mykonos, it was bedlam. That’s because there were a four cruise ships in port, so there were buses for the cruise passengers, private transfer vans, city buses, and no taxis in sight. No Taxis! I would have taken one, but there was nothing available.

If there’s anything I dislike more is worrying that I’m going to miss my ferry or flight because I’ve miscalculated time or transport. That’s why I stay as close to my continuing transportation if I’m simply coming and going.

If you need to catch a ferry in the morning, stay near the Port. If you are flying out the next morning, stay closer the airport!

And for Mykonos in particular, book your ferry ticket online, so you avoid this ticket line. There is a walk up window to the right of this line where you can pick up tickets you’ve purchased online.

Where is the best place to stay on Mykonos near the Airport?

I do recommend heading to Platis Gialos area, close to the airport. There is a nice stretch of beach, albeit quite busy, and there are a few hotels in Mykonos Island on that stretch of beach. There was no throbbing night life, and there were a variety of cafes, restaurants, and a grocery store. For a day or two of chilling on the beach, near the airport, this is fine. You get the best of both worlds.

I booked two nights at Acrogiali Beach Hotel on Platis Gialos on the south side of the island and only 15 minutes to the airport.  It’s a lovely 4* hotel with rooms set in a leafy courtyard. The rooms come with a balcony or patio. The Acrogiali Hotel is smack dab on the beach and you don’t have to pay for sun loungers. The public pay $35 for 2 loungers and an umbrella. There are options for boat excursions, albeit pricey, or you can just chill by the beach and swim. I had a 2-night stay for $160 and it was quite quiet at night. 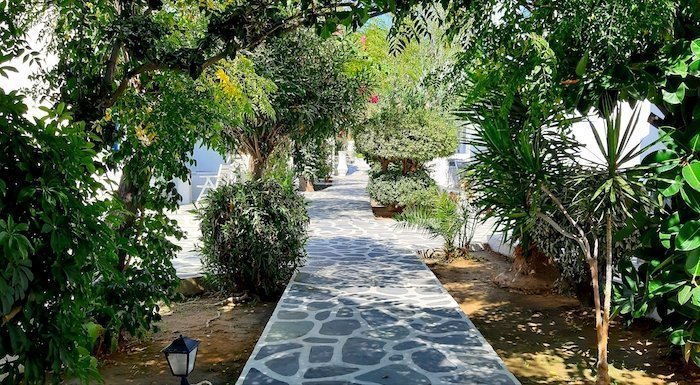 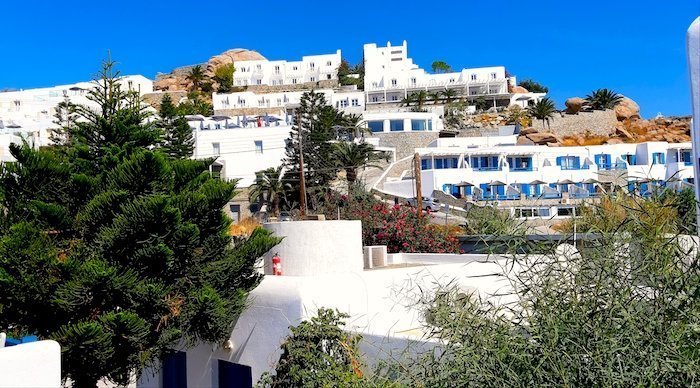 Other hotels in Platis Gialos to consider are:

If you are flying into Mykonos and have a ferry out the next day, stay near the New Port area. I know that may sound like a lifeless location, but there are quite a few 4 and 5* hotels nestled there, so other people are catching on.

The crazy night life is non existent there. In fact, it’s a bit comatose. You can get a nice dinner, and if you want, you can take a local bus to town right on the main road, or walk the 30 minute around the harbor to get to Mykonos town. It’s pleasant there.

I stayed at a place called Makis Place, which is literally in front of the port. It was an excellent apart-hotel with a swimming pool, restaurant, free breakfast and across the street from the bus stop to Mykonos town. The hotel will drop you at the ferry terminal in the morning, which is literally 5 minutes away, or you can walk it in 10 minutes. The ferry terminal is right in front of the hotel on the other side of the Quay. It’s very easy and you won’t miss your ferry. 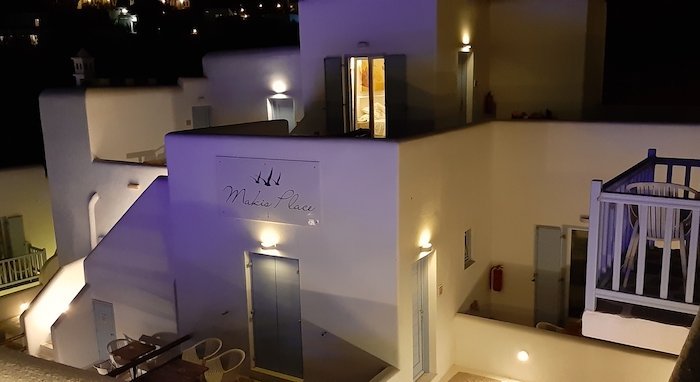 Other hotels along that stretch are:

I wouldn’t want to be on the other side of the island with a ferry leaving at 10am. But these are some of the best places to stay in Mykonos if you’re not planning to stay too long. 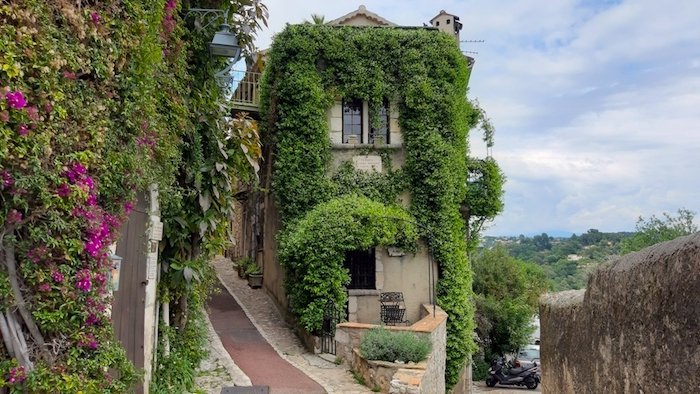 Nice, in and of itself, is a great place to explore for a few days. But if you are here longer, you will definitely want to travel further afield to 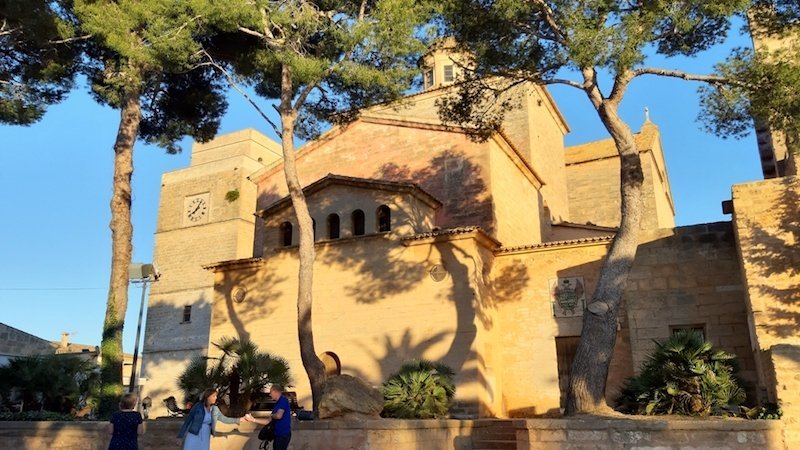 A recent trip to Alcudia Majorca was quite a pleasant surprise for me. I’d been to Alcudia in the past, but only for a quick day trip when I was