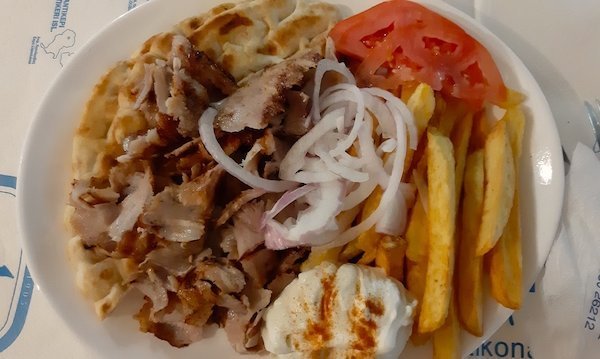 Naxos, Greece is one of those fortunate Greek islands that is quite fertile. Their cuisine includes lots of locally grown vegetables, specialty cheeses, cured and grilled meats, and the popular Naxian potatoes. I spent nearly a week on Naxos and below are some typical Naxos food to sample when you visit this beautiful island in the Greek Cyclades.

Yes, you will find many of these items on other islands in Greece, but the Graviera cheese and the potatoes are quite special to Naxos.

The name sounds like tacos, but they are Dakos. This is a huge mound that is much more filling than you’ll image. There is a good amount of olive oil on the bottom of the plate, then they add a thick slice (about 1.5”) of rusk bread. Then, heaps of tomatoes, olives, feta cheese and oregano are piled on top. This is quite a cheap menu item, so you may think it’s simply an appetizer. But believe me, it’s heavy and you’ll be stuffed after eating this. Actually, rusk bread is used as a base for sweet or savory plates. I paid $6 for this.

Tzatziki is a frequent dish in Greece, Turkey and the Middle East. You can eat by itself, with some bread, or use as a sauce for your kabobs.

It’s made with salty strained yoghurt, cucumbers, olive oil, garlic, a bit of lemon juice and dill. This is really tasty and you have to be careful because you can fill up on this stuff. I paid $3-4 a plate and it’s definitely enough for two people to enjoy with your meal.

Roasted pork or chicken from the spit

There are lots of places on Naxos that have a spit with different meats grilling each day. These are truly fresh, tasty, well grilled meats usually served fried potatoes. The potatoes are, ‘Fresh Fried Potatoes’ but they are thinly sliced potato fries. This plate was $8. A pint of Mythos beer costs $3, and a bottle of water is $.50. It was a bargain meal with a view of the sea.

Naxos is a fertile island and they grow lots of vegetables like tomatoes, onions and cucumbers, but Naxos is famous for its staple crop, the potato.

The lamb here is slow roasted with lemon, and it literally breaks apart with your fork. It is some of the most delicious lamb you’ll find. And the tasty lemon rice is a nice complement. This might not seem heavy but it’s really filling. I couldn’t even finish it. It was simply too much with the side of Tzatziki I had at the same time.  I paid $12 for this tasty dish.

This seems like a no brainer, but I’m telling you a Greek Salad tastes so much better in Greece. I’m not sure if it’s the flavor of the locally-grown tomatoes or the immense flavor of the tangy onions. Maybe it’s the slab of thick-cut feta on top, or maybe it’s the aroma of fresh oregano, but you won’t be disappointed. You typically pay $6-8 for a Greek salad.

If you’re not a fan of eating a gyro sandwich all wrapped up, you don’t have to. This is actually my favorite. A gyro platter is actually the same thing as a gyro, just spread out. You have slices of pita bread under your gyro meat of pork, chicken or lamb along with Tzatziki sauce, tomatoes, cucumbers and onions. You also get a good helping of fried potatoes. I paid $7.50 for this! A typical gyro, wrapped up to take out, is about $2! 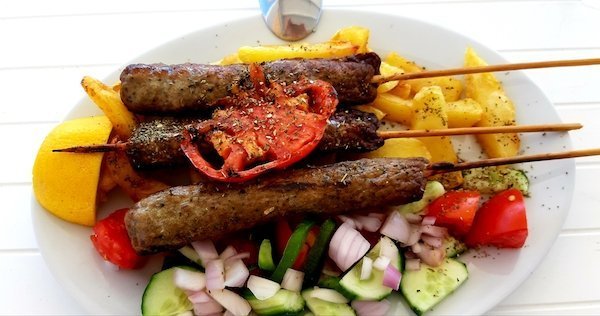 Kebob plates come in a variety of meats, like ground lamb and pork wrapped around a skewer and grilled. You get this with potatoes, cucumbers and tomatoes.

I have to admit many of the plates in Greece come with the same condiments, but I live on Greek salad at home anyway, so I’m quite pleased with the meals in Greece. All this cost $8.

Graviera cheese is a typical Naxos food you should try. It is a popular cheese here that’s made primarily from goat’s milk and has a sweet-fruity taste. There are different varieties of Graviera on different islands. Some use cow’s milk but primarily it’s goat. This side plate was quite nice, and the fact that I can eat cheese on potatoes is just up my alley. This was $4.

Kataifi is a bomb of a dessert! This is made from shredded phyllo dough. It reminds me of those huge shredded wheat biscuits I’d eat for breakfast.

Inside there is a mix of pistachios, walnuts or almonds mixed with cinnamon and cloves, all drenched in honey. Then there is a mound of ice cream on top.  It’s really heavy and one of these is big enough for two people.

I could only eat half of this. I finished the ice cream and took the other half home to enjoy with my coffee the next morning.

The ice cream is so thick and creamy – better than any ice cream you’ll enjoy. This decadence cost $5.

Greek coffee is normally really strong, like espresso but even stronger in my opinion. So here I can only stomach a Frappe, which they mix with milk a bit of sugar and it’s whipped up and served over ice. The froth is really thick and it gives you a good coffee buzz.

There are so many other typical Naxos food specialties like rabbit, rooster, octopus and boiled lamb. I could spend month eating here, but there are simply not enough days.

This was just a sampling of what you could try on Naxos Greece. Let me know if you’ve been to Naxos and what you enjoyed. Would love your feedback.

Life On The Mediterranean

US expat living the life on the Mediterranean in the South of France. I regularly travel to Spain, Italy, Greece and other intriguing locations around the Mediterranean. Former Hyatt Corp Marketing Manager, student accommodation director and hotel photoshoot art director. 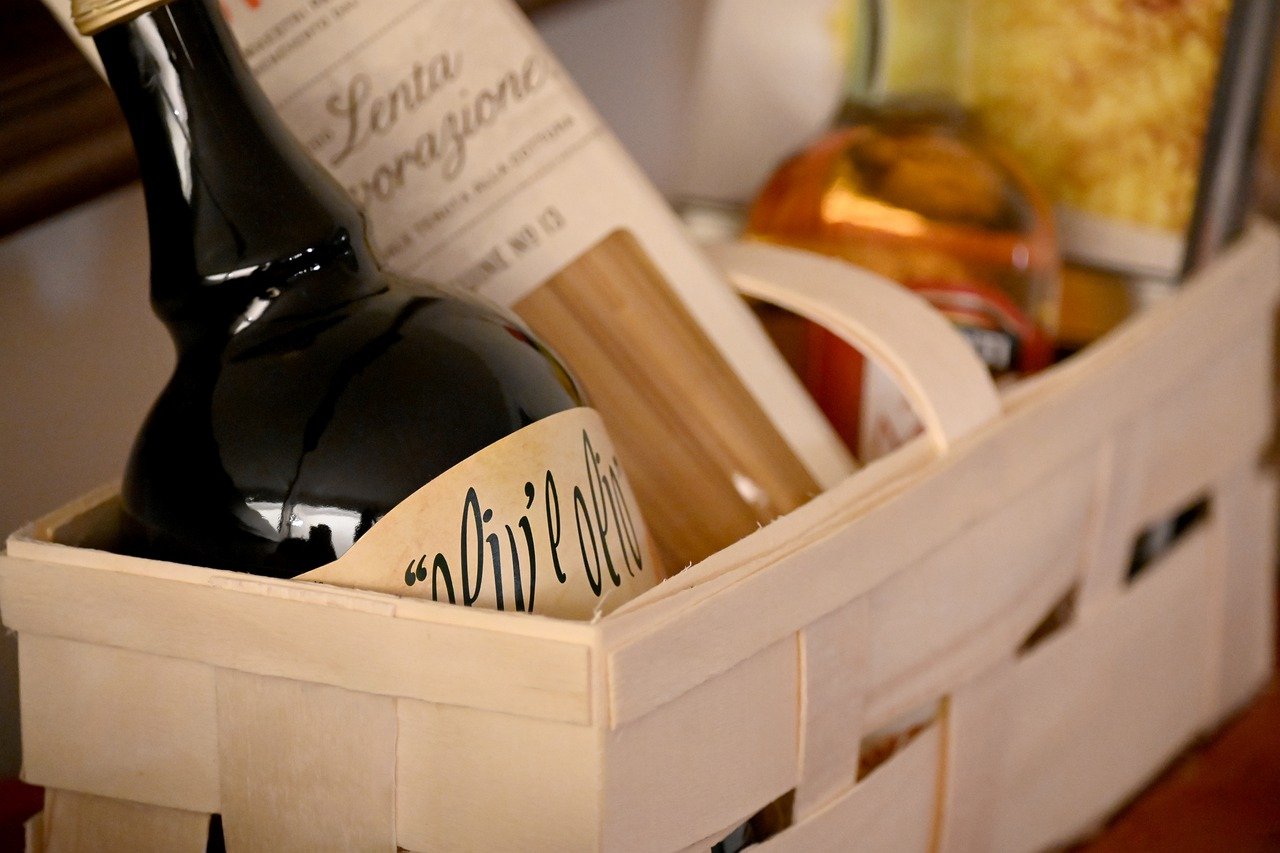 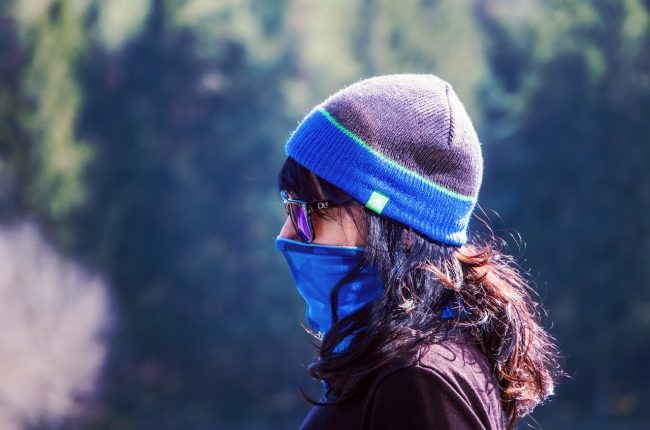 Traveling during a Pandemic

Things to do in Santorini Greece

ABOUT LIFE ON THE MEDITERRANEAN

Hi I'm Maureen! You're in the right place if you are looking for travel inspiration and experiences along the Mediterranean Sea! Originally from Wisconsin, and a self-proclaimed, 'cheesehead.' The South of France is now home. I love the sun, sea, the mountains, the Mediterranean diet, the languages and cultures. My Mediterranean travels take me along the Cote d'Azur, to Italy, Spain, Greece and more! You never know where you'll find me. Head to my About section for more info.