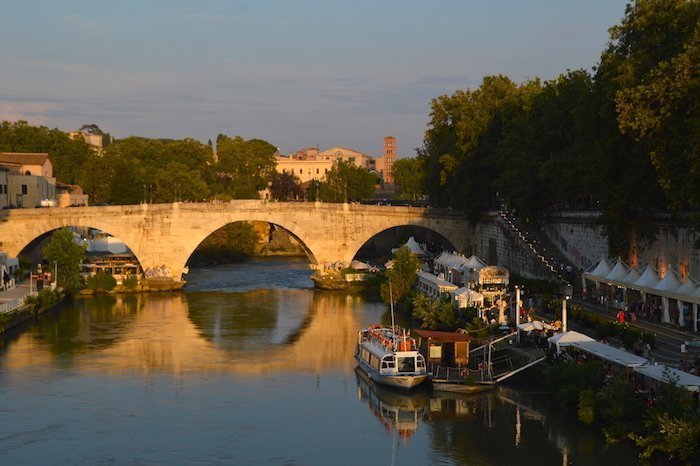 Rome is such an amazing city to explore as it is, and if it couldn’t get any ‘cooler,’ here’s one festival you should not miss. The Tevere Expo is back for 2022!

Since 2003, Rome has been hosting the annual summer festival, Lungo il Tevere. It’s where the banks of the famous Fiume Tevere, or Tiber River, in the heart of Rome come to life with numerous cultural events.

This post contains affiliate links. If you click on something and make a purchase we may make a small commission. Also, as an Amazon associate we earn from qualifying purchases. For more information, please see our Disclosure Statement about all our affiliations. 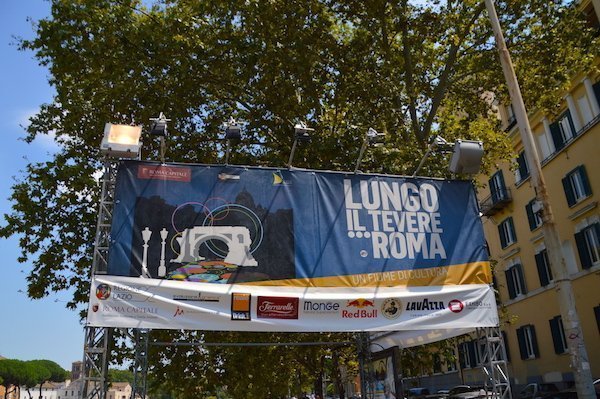 You can experience theatre, dance, and music in venues along the river; most of which are free. This is really a fun Rome cultural event.

Numerous artisans display their one-of-a kind pieces you can take home to impress your friends, and there are plenty of places to try craft beers, international and local cuisine and you might even find the best gelato in Rome there. It’s a great place to meet friends for the evening.

The Tiber becomes a river of culture where the heart of the city comes to life. I’ve been here a couple of times and I continue to be impressed with all that is there to see and do.

Check all my travel resources here so you know what I use to book accommodation. 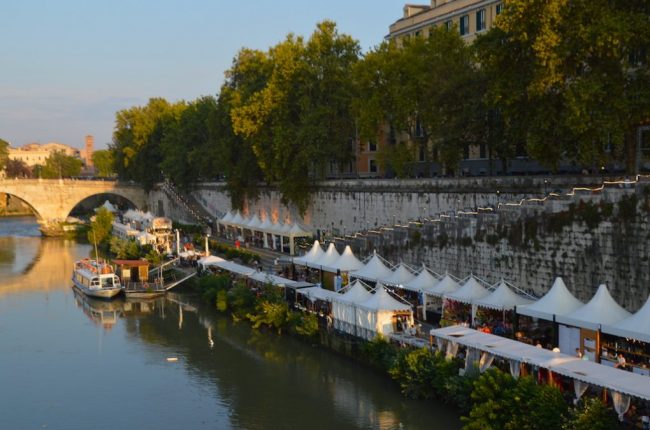 What are the dates of the Lungo il Tevere?

So when is il Lungo il Tevere? The annual Lungo il Tevere runs roughly from early June until last week in August/first weekend in Sept. The dates for 2022 are 11 June – 29 August. I can tell you I will not miss it this summer.

The Tevere Expo flanks the banks of the Tevere River near the Trastevere neighborhood of Rome and the atmosphere is very modern day Roman.

One thing to keep in mind is that Romans go on vacation in August. This can be a curse and a blessing. You may find several places closed and others remain open.

However, that means you are not competing with the locals to see either the Lungo il Tevere or the many monuments that you must see in Rome.

I’ve been in Rome in August, and while it was scorching hot, the city was empty. Yes… empty. Most Romans are on holiday and the tourists were probably out enjoying one the the many day trips from Rome. So consider going in August… ? 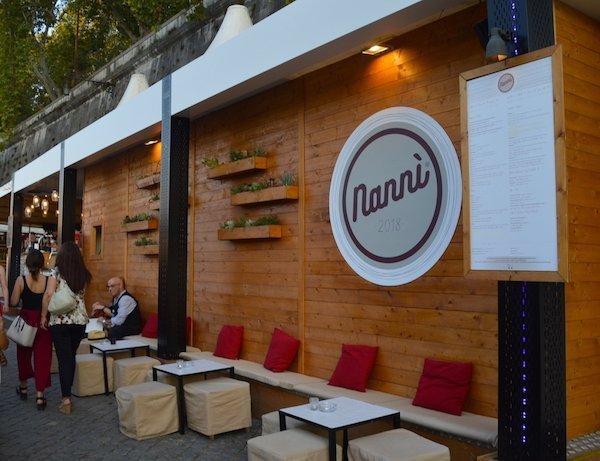 You start at Piazza Trilussa just on the south side of Ponte (Bridge) Sisto and follow the Tevere River around to the end at Porta Portese.

To be honest, the most lively areas are from Ponte Sisto to Ponte Palatino, but explore all of it to see everything. Below is a great map to get your bearings of the Lungo il Tevere. 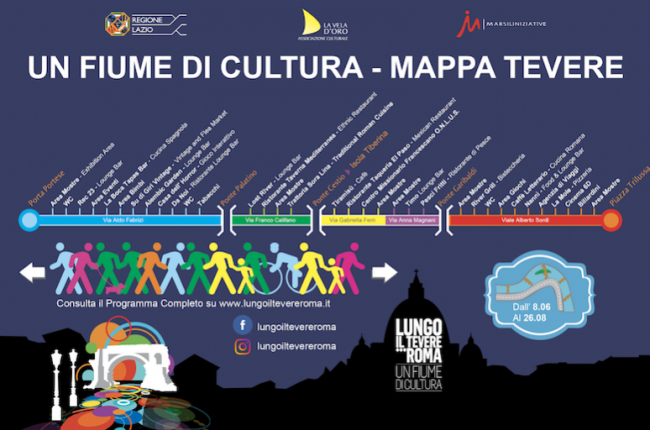 While you are snooping around the artist’s kiosks and restaurants, if you can get a spot at the Lost River Lounge Bar, stop there!  You are near the small rapids of the Tiber River flowing down. The Tiber was flowing quite swiftly when I was there and was a nice, lively addition to when I was meeting friends. It also created a bit of a breeze in the humid, Roman air.

Lungo Il Tevere starts at 7:00p and most of the cultural events, like the theater, dance… start around 9/9:30p.

Romans do things late and this is no exception. I have to admit I found their hours annoying, but only on the weekend. I wanted to go there during the day on a Saturday. Not only was it closed, I was told I couldn’t even enter to take a look around. What???

Understandably, people have day jobs and do these summer festivals in the evening.  It’s nothing grave, but a bit annoying. 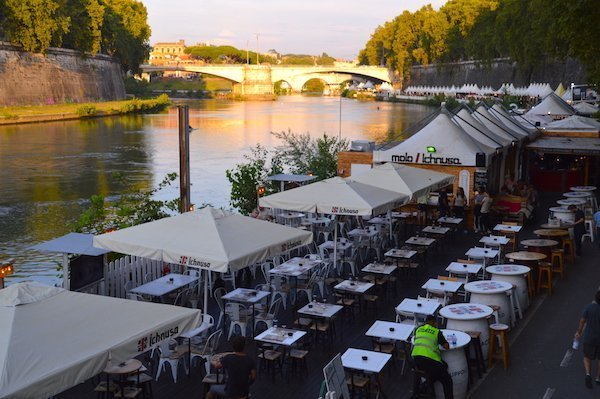 As a caveat, this festival gets frickin’ busy at night! If you want to have a look around, sample some food and drinks, and actually get a seat, go early! From 7-9p, most Italians are dining and will come to Il Lungo il Tevere after dinner. This is when you’ll also have the attention of the vendors, whether at the restaurants or the artists’s kiosks.

And speaking of food, just north of here you can sign up for the Testaccio Neighborhood Food and Market tour. You will spend more than 3 hours discovering the neighborhood and sample more than a dozen tasty, local items. A couple of wines are on the menu for the day as well. It’s a lovely way to discover the Testaccio area in Rome. 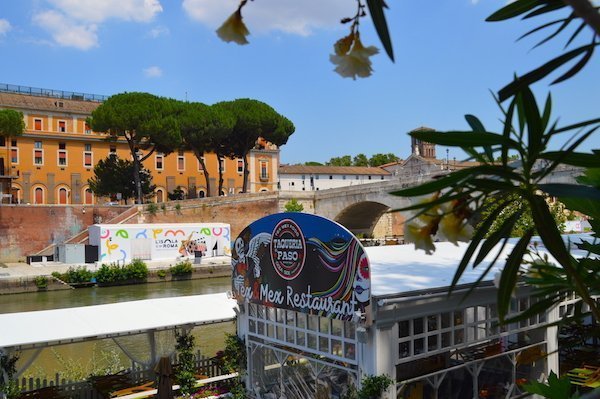 For your fix of Tex-Mex, stop by Taqueria Paso Restaurant

If you like cinema, head to Isola Tibertina to the Isola del Cinema, which runs 16 June to 3 September 2022. This is a multi-genre event with more than 80 nights of film screenings and one-of-a-kind discussions with important members from the film community. 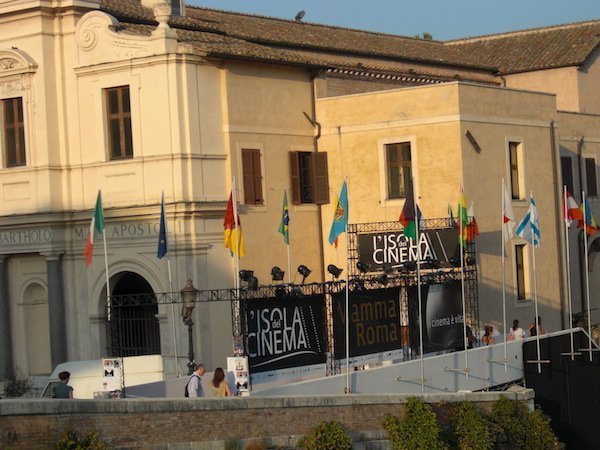 You will see films by up-and-coming directors, independent films, new documentaries, and major productions in their original language.

There is a lot to take in here, and if you have the time and inclination, do it! But plan in advance! Ticket prices will vary depending on the show you are seeing and how many times you wish to have access to films. Check their website for more details. It’s in Italian and English.

You might be interested to read about that one time I was a film extra in Rome with Kevin Spacey. What a fun fiasco! 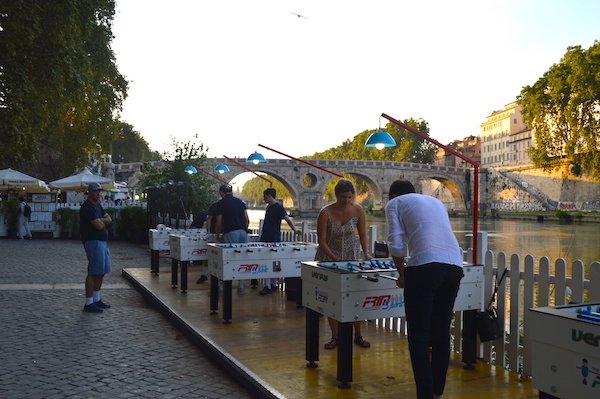 The fascination of foosball

How to get to Lungo Il Tevere

If you are staying in the heart of Rome, you simply find Ponte Sisto, or the Sisto Bridge and cross over the Tiber river. If you are near a tram route in another part of town, here are the metro and tram network maps.

This is very convenient if you are flying into Rome’s Fiumicino airport. From the airport, you have two lines to choose from: either the Leonardo Express that will drop you off at Roma Termini train station, or you take the cheaper local train, the FL1 from Fiumicino airport to Trastevere Station. Then catch either the Tram lines 8 or 3 to head toward the river. You can also walk from the Trastevere train station. 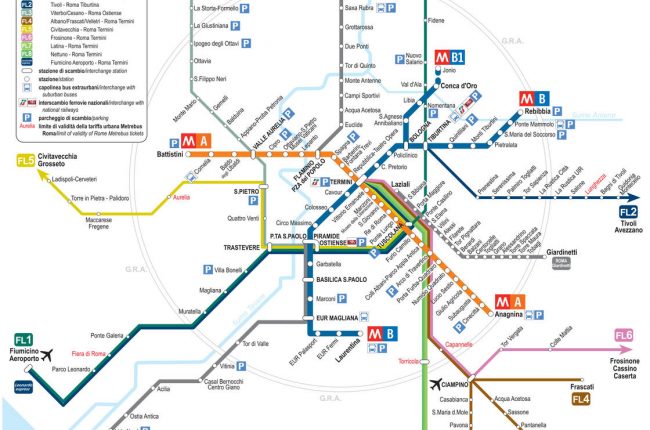 ©Metro Rome map. Take the FL1 from Fiumicino to the Trastevere stop. It’s only €8. 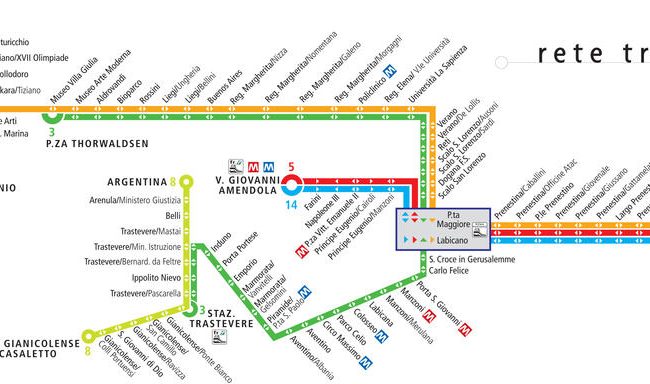 Rome is such a beautiful city to explore and much of it can be done on foot. There are so many ancient monuments in Rome to see, and neighborhoods that let you forget you are even in Rome. Make time to explore Rome.

Where to stay near il Lungo il Tevere

You can easily find apartments hotels in the Trastevere location of Rome with no problem.

A fantastic, superb-quality hotel to stay at, to be in the heart of the action, as well as close to il Lungo il Tevere, is Hotel Ponte Sisto.

This hotel is just on the other side of the Ponte Sisto (Sisto Bridge). This is on the side by Campo de’ Fiori, so you are killing two birds with one stone with this hotel.

This is a fantastic 4*hotel with excellent service and amenities. I’ve stayed here a couple of times and I continue to go back. Check hotel prices here! 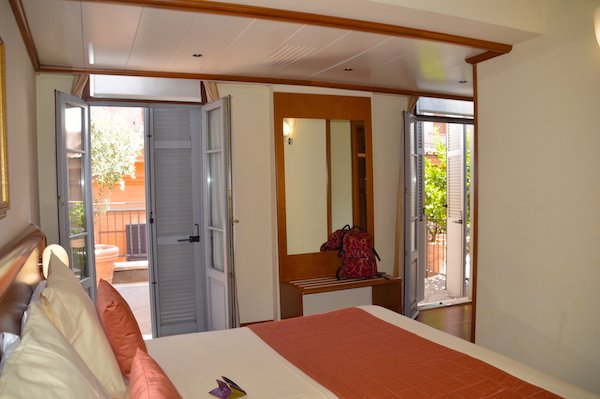 Superb double room at Hotel Ponte Sisto with a terrace. Ask for room 505! 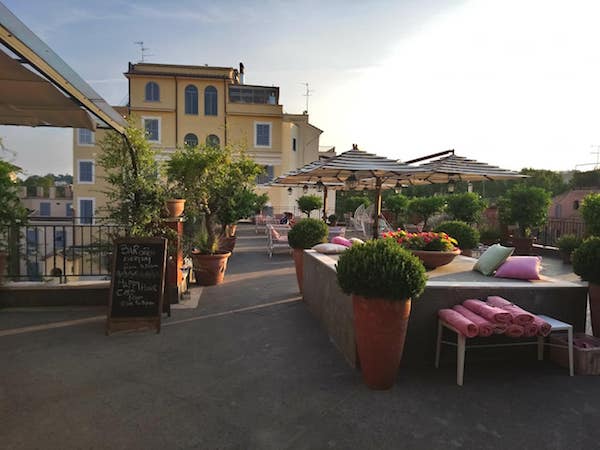 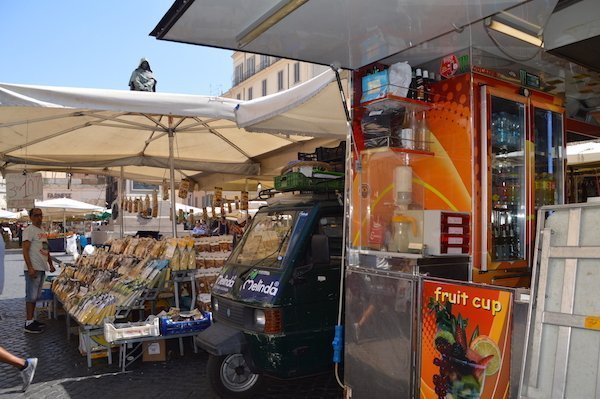 I have also book a variety of Airbnb in this area of Rome when I was a film extra, and I have not been disappointed.

There you can experience the daily Campo de’ Fiori market and the many, surprisingly reasonably-priced restaurants. I dined at a place called Virgilio, and was extremely surprised as to the price of the bruschetta ($3.50 – big enough for two) and the Spaghetti Carbonara (spaghetti with eggs, bacon and parmesan) for $15. There is a lot of competition in that area for patrons and many disregard Campo because there are a lot of tourists. 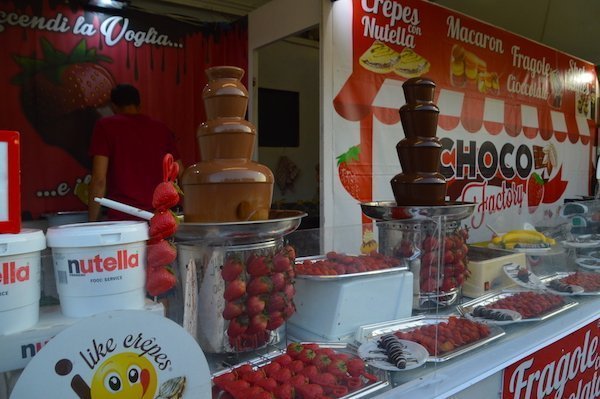 If you get there, let me know what you think and what you tried. And here are 16 additional things to do in Rome while you are there. Have a great time. Enjoy!!

You don’t want to miss Rome’s famous summer festival. Pin this for later! 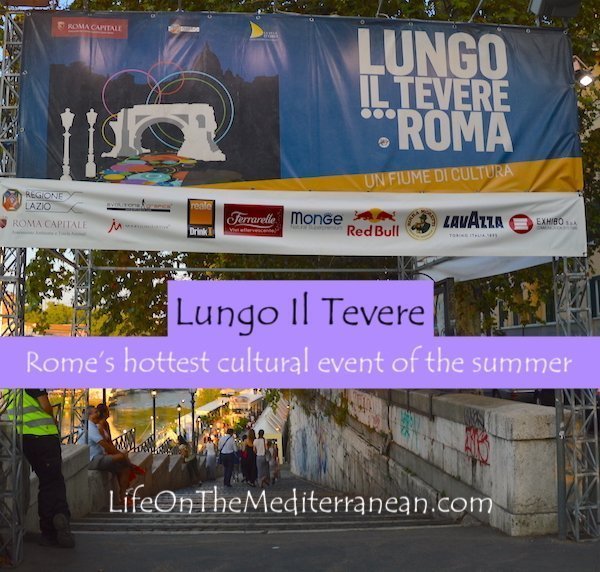 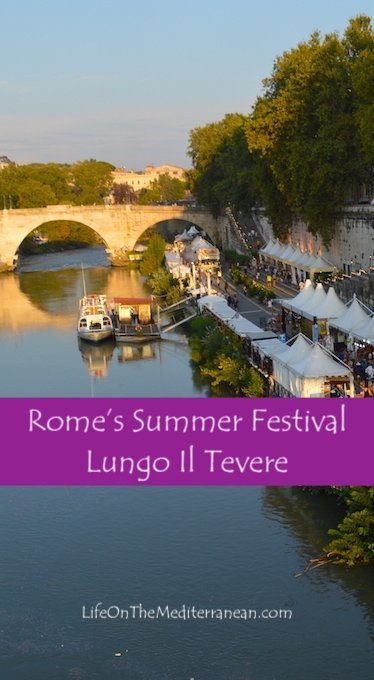 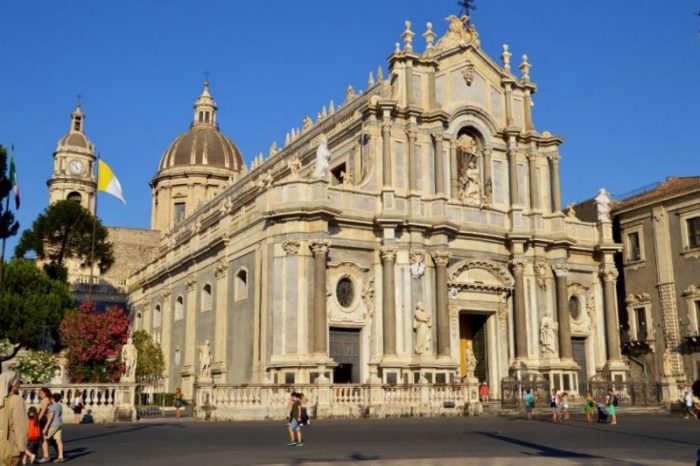 Catania, on the eastern coast of Sicily, is one of those cities that is often overlooked for its more glamorous neighbours of Taormina and Siracusa. It’s a city of a 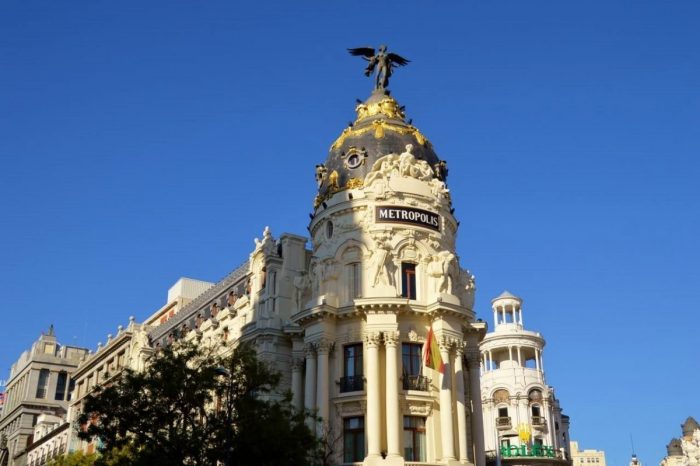 When I visit a large city and only have a few days, I’m usually fretting about what to do and see. I want to see the highlights, but I also